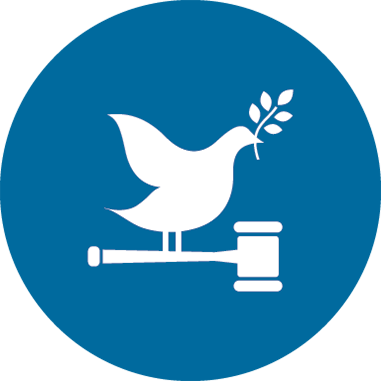 Promote peaceful and inclusive societies for sustainable development, provide access to justice for all and build effective, accountable and inclusive institutions at all levels.

At its most fundamental level, air transport brings people together. This fosters understanding and helps bridge divides and ultimately helps build peace. It is perhaps best elaborated in the preamble to the Chicago Convention, the ‘founding document’ of international civil aviation:

"Whereas the future development of international civil aviation can greatly help to create and preserve friendship and understanding among the nations and peoples of the world, yet its abuse can become a threat to the general security; and

Whereas it is desirable to avoid friction and to promote that co-operation between nations and peoples upon which the peace of the world depends;

Therefore, the undersigned governments having agreed on certain principles and arrangements in order that international civil aviation may be developed in a safe and orderly manner and that international air transport services may be established on the basis of equality of opportunity and operated soundly and economically;

Have accordingly concluded this Convention to that end."

Aviation also has a very visible responsibility for the security of its operation and the industry works closely in partnership with governments and multilateral bodies to ensure that system is robust. In addition, many aviation partners are working to reduce the use of air transport as a conduit for illegal activities such as wildlife and human trafficking.

Supporting tourism in the Maldives

Celebrating 70 years of the Chicago Convention