Reducing carbon footprint by 66%, diverting 93% of waste from landfill and trialling new technologies to improve aircraft performance on set departure routes are just a snapshot of the highlights in Stansted Airport’s corporate responsibility report published today, reflecting on performance during the first year of M.A.G ownership. 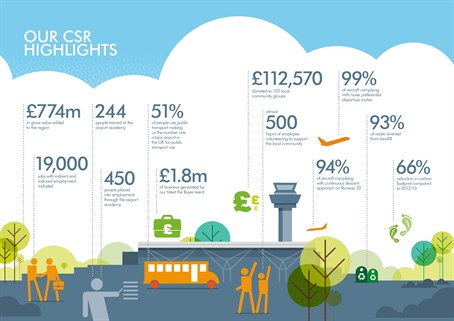 As Stansted continues to grow, carefully managing the airport’s operations is at the centre of M.A.G’s CSR strategy, which seeks to ensure the social and economic benefits of the airport are shared as widely as possible whilst minimising environmental impacts.

M.A.G’s Director of CSR, Neil Robinson, has lead the transition to bring a renewed focus on CSR at Stansted and commenting on the report published today he said: "The team at Stansted shared our desire to drive forward a new CSR strategy with great progress made in just the first year, with the most significant saving being a 66% reduction in the carbon footprint achieved by moving the airport onto M.A.G’s group contract for purchasing low carbon electricity, which is generated using only biomass such as wood and straw rather than coal.

"Our commitment to waste management was recognised when Stansted was awarded Gold accreditation by National Recycling Stars and with the volume of waste recycled or recovered increased by 24% we finished the year having diverted 93% of waste from landfill putting us firmly on-track to achieve our target of sending zero waste direct to landfill by the end of 2015.

"We had very encouraging results from a trial carried out in partnership with easyJet and in agreement with the CAA of new technology that helps aircraft stay closer to the centre line on set departure routes, which will help reduce the noise footprint of people affected by aircraft noise on the ground and we’re now expanding this trial to other airline partners.

"Our drive to improve staff engagement got off to a flying start when we introduced a dedicated team for internal communications and through renewed focus of our community strategy a new work experience programme was introduced, we increased staff volunteering, set up a mentoring scheme for GCSE students and established the London Stansted Community Network to bring together the 190 companies based at Stansted to talk as one community.

"This report outlines just some of the first stepping stones laid by M.A.G for the new CSR strategy being implemented at Stansted and we’re currently out to public consultation on our draft Sustainable Development Plan which will set the future business objectives and the CSR agenda as we take the business forward."

The full report is available online at www.stanstedairport.com/corporateresponsibility

Some of the key achievements under each of the objectives are:

Dealing with the other side of climate change