The Rolls-Royce composite carbon/titanium (CTi) fan blade for the Advance and UltraFan engine designs has taken to the skies for the first time, marking another milestone for the programme. 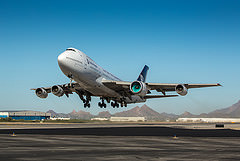 A set of the CTi fan blades successfully completed a first flight incorporated into a Trent 1000 "donor" engine, on a Rolls-Royce 747 flying test bed at Tucson, Arizona, USA.

The Advance engine design will offer at least 20 per cent less fuel burn and CO₂ emissions than the first generation of Rolls-Royce Trent engine and could be ready for entry into service from 2020.

UltraFan™, a geared design with a variable pitch fan system, is based on technology that could be ready for service from 2025 and will offer at least 25 per cent less fuel and CO₂ emissions against the same baseline.

Mark Lewis, Rolls-Royce, Test Pilot, said: "The flight went very well and the demonstrator engine containing the CTi fan set performed perfectly, just as expected. We look forward to testing the system even more rigorously in the next phase."

CTi technology delivers lighter fan blades while retaining aerodynamic performance. Combined with a composite engine casing, it forms a system that reduces weight by up to 1,500lb per aircraft, the equivalent of carrying seven more passengers at no cost.