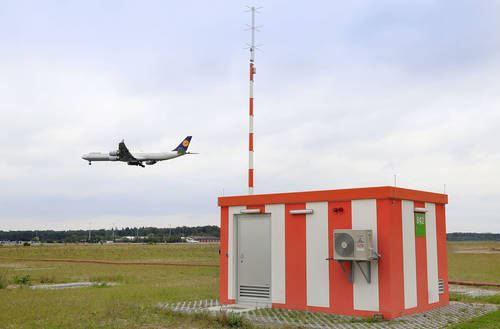 “After only about 16 months of signing our cooperation agreement, we are pleased, together with our partners DFS and Lufthansa, officially to inaugurate GBAS at Frankfurt Airport,” said Fraport AG executive board chairman Dr. Stefan Schulte at the launch ceremony. “GBAS underscores once again our international leadership in new technologies and also shows how we are consistently implementing elements of the catalog of measures being developed within the Alliance for Noise Abatement at Frankfurt,” stressed Schulte.

“GBAS heralds a new age in flight navigation,” declared DFS managing director of operations, Robert Schickling. “Together with Fraport and Lufthansa, we are proud to be operating this new satellite-supported landing system at the European continent’s second largest airport. I am convinced that GBAS, in the long term, will eventually play a very important role at Frankfurt Airport and far beyond.”

“After retrofitting of our Airbus A320 fleet with vortex generators as an active noise abatement measure, we are now commencing GBAS operations in cooperation with Fraport and DFS. Today, we are pleased that our Boeing 747-800 is the first plane officially to use this system for landing at our largest hub. Soon, more than thirty Lufthansa Airbus A380 and Boeing B747-8 jets will be using GBAS to land,” said Kay Kratky, Deutsche Lufthansa AG’s member of the board Passage for the Frankfurt hub and operations.

The inauguration of GBAS by the three partners once again underlines how Frankfurt Airport is serving as an international role model in the area of active noise abatement initiatives and technologies. Fraport, DFS and Deutsche Lufthansa expect GBAS to play an important part for increasing efficiency and achieving noise-reducing approach procedures. The primary advantage of GBAS is that a wide range of approach procedures can be offered with a single system. Up to 49 approach flights to different runways can be now be supported by a single GBAS station. Because of the diversity of flight approach options, there is the opportunity to develop new approach route solutions, thereby relieving noise blight for area residents. Furthermore, GBAS requires far less testing than an ILS system that has to be checked and calibrated regularly with the aid of specially-equipped aircraft.

In the long term, the new landing approach system will also be able to facilitate segmented landing approaches – with the goal of further reducing the impact of aircraft noise in the region. In the medium term, GBAS also will make it possible to introduce steeper approaches on all of FRA’s landing runways, increasing from currently 3 degrees to 3.2 degrees – up until now only possible for Runway Northwest. Along with the GBAS installation on the ground, it is necessary for aircraft to be equipped with the corresponding receivers. To first utilization potential of the system is possible with GBAS-capable aircraft types such as the Airbus A380, Boeing 747-8, 787, and 737-NG. The cost for installing and operating the GBAS ground station runs at about €5 million, while equipping the aircraft for GBAS also requires investment in the millions of euros.

For precision approach flights, GBAS provides digital guidance and works using the so-called Diferential Global Positioning System (DGPS) procedure. The new technology delivers considerable advantages compared to the existing approach procedure used at FRA. For example, satellite navigation based on the American Global Positioning System (GPS) offers accuracy within 10 meters. Furthermore, this accuracy can be increased with the aid of GBAS a ground station. Signals transmitted by the GPS satellites are received by the GBAS system on the ground, compared with its own position, and then transmitted to the landing aircraft as a corrected signal with approach coordinates. In this manner, the approaching aircraft can determine its own position with much more accuracy.

When all aircraft in the future are equipped with the corresponding GBAS onboard receivers, then GBAS will be able to fully replace the instrument landing system (ILS) technology.