Airplanes get most of the attention at an airport, but a new project to convert the rest of the vehicles on the airfield from fossil fuels to electric power is about to save millions of dollars and tons of greenhouse gases at Seattle-Tacoma International Airport. 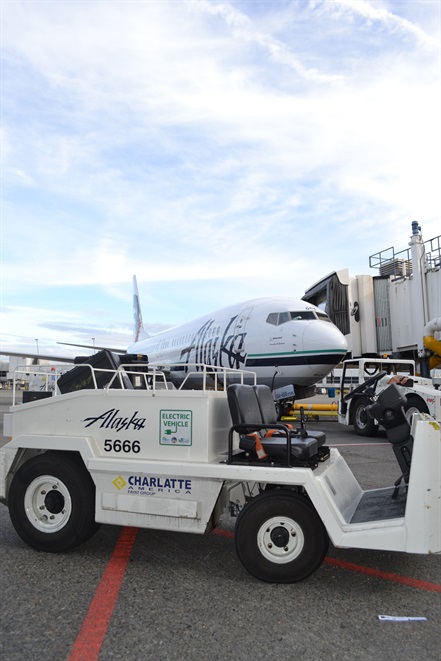 The Port of Seattle, along with Alaska Airlines, Western Washington Clean Cities and U.S. Representative Adam Smith today unveiled a new project providing nearly 600 electric charging stations throughout the airport for ground support equipment (GSE) such as baggage tugs, bag ramps and pushback vehicles.  Converting the GSE from fossil fuel to electric, each year the project is projected to save $2.8 million in airline fuel costs and 10,000 tons of greenhouse gas emissions – the equivalent of taking 1,900 cars off the road.

"The eGSE project here at SeaTac should serve as an example of how energy efficiency is not only good for the environment, but is also a smart financial investment,” said U.S. Congressman Adam Smith. “We must continue to invest in alternative energy technologies that protect consumers, reduce greenhouse gas emissions, and strike a balance between moving away from our dependence on fossil fuels while mitigating the economic impact of that transition."

The port has installed bright yellow charging corrals with smart, fast-charging plug-ins for vehicles to receive a full charge in less than 4 hours. The smart technology determines which vehicle needs the most charge and meters out the power. This first phase provides 296 charging locations throughout concourse D, C, and the north satellite. The second phase will cover the rest of the terminal at concourse A, B, and the south satellite for a total of 576 charging locations by September.

“This project provides the infrastructure for airlines to convert their vehicles from diesel to electric in Sea-Tac’s effort to become the first major airport in the U.S. to provide charging stations at all gates,” said Courtney Gregoire, Co-President, Port of Seattle Commission. “As many as 650 vehicles could eventually be covered by electric technology and make a huge difference in the airport’s carbon footprint.”

Alaska Airlines has taken the lead in this green opportunity with 204 electric vehicles (146 with Alaska, 58 with Horizon) in operation on the ground at Sea-Tac. The environmental benefits are substantial. Alaska’s conversion to electric vehicles is the equivalent of taking 360 passenger vehicles off the road for a year, or a reduction in carbon dioxide emissions of 1,000 tons a year.

“Switching from fossil fuels to electric-powered equipment not only benefits the environment by reducing carbon emissions and fuel use, but the transition is expected to save Alaska Air Group about $300,000 a year in fuel costs,” said Jeff Butler, Alaska Airlines’ vice president of the airport operations and customer service. “These sustainability efforts help us keep our costs down in order to provide better value for our customers.”

The $31 million project is funded in large part through federal grants. The U.S. Department of Energy provided $5 million through a grant with the Western Washington Clean Cities Coalition. An additional $3.5 million came from a Federal Aviation Administration grant. Part of the grant money is being used to help airlines fund the purchase of new electric vehicles. Additional airlines are scheduled to join the program later this year.

“This project had a lot of moving parts,” said Stephanie Meyn, Program Manager for Western Washington Clean Cities. “We applaud the Port of Seattle and Alaska Airlines for their leadership, commitment and creative collaboration.  They’ve helped create a successful model for other airports to achieve cleaner air, reduced reliance on petroleum, and a healthier community.”

For a video describing the new electric GSE system and its benefits, click here.

Investing in Clean Air at Sea-Tac

Operated by the Port of Seattle, Seattle-Tacoma International Airport (SEA, KSEA) is ranked as the 15th largest U.S. airport, serving more than 34.7 million passengers and 292,708 metric tons of air cargo in 2013. With a regional economic impact of more than $13.2 billion in business revenue, Sea-Tac generates more than 138,000 jobs (89,902 direct jobs) representing more than $2.2 billion in direct earnings and $412.4 million in state and local taxes. Twenty-three airlines serve 72 non-stop domestic and 19 international destinations.

The Port of Seattle is setting the course for the future with the Century Agenda.  In 25 years, we will generate 100,000 new jobs and increase international trade and tourism, while protecting the environment with innovative sustainability initiatives.  Learn more about how the region’s economic engine will keep powering King County’s economy for years to come!

A chat with Avinor