United Airlines is the first to fly with new, fuel-efficient split scimitar winglets

Airline's combined winglet technology will save the airline $200 million a year. 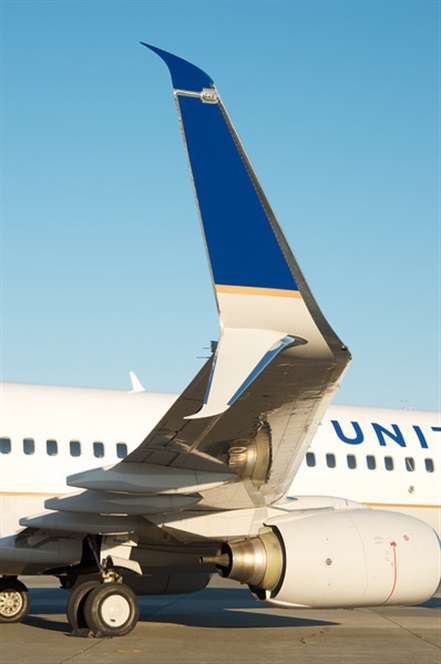 A United Airlines Boeing 737-800 aircraft freshly retrofitted with new Split Scimitar Winglets took to the skies yesterday, marking the first commercial flight worldwide to operate with the advanced winglet technology. United flight 1273 on Tuesday took off from the airline's Houston hub and flew to Los Angeles. The airline installed the innovative winglets on the Boeing 737-800 after the FAA approved the technology made by Aviation Partners Boeing (APB) earlier this month.

"We are proud to be the first airline in the world to fly with this unrivaled winglet technology that cuts our fuel consumption while simultaneously reducing carbon emissions," said Ron Baur, United's vice president of fleet. "We appreciate APB's commitment to developing fuel-saving technology and look forward to realizing savings that come from the improved fuel efficiency."

Last year, United served as the launch customer for the Split Scimitar winglet when it made a firm commitment with APB to retrofit its 737-800 and 737-900ER aircraft.

United currently has more than 350 aircraft fitted with advanced blended winglet technology. Once the Split Scimitar Winglets installation is complete, the combined winglet technology on United's 737, 757 and 767 fleet is expected to save the airline more than 65 million gallons of fuel a year, equivalent to more than 645,000 metric tons of carbon dioxide and $200 million per year in jet fuel costs. The savings from the Split Scimitar Winglets will contribute to United's overall fuel-savings initiative to reduce its fuel costs by $1 billion by 2017.

United Airlines and United Express operate an average of more than 5,300 flights a day to more than 360 airports across six continents. In 2013, United and United Express carried more passenger traffic than any other airline in the world and operated nearly two million flights carrying 139 million customers. United is delivering a more flyer-friendly experience, offering more premium-cabin flat-bed seats and extra-legroom, economy-class seating than any airline in North America. In 2013, United became the first U.S. global carrier to offer satellite-based Wi-Fi, including on long-haul overseas routes. The airline also features DIRECTV® on more than 200 aircraft, with more live television access than any airline in the world. United operates nearly 700 mainline aircraft and, in 2014, will take delivery of 36 new Boeing aircraft and welcome the E175 aircraft to United Express. Business Traveler magazine awarded United Best Airline for North American Travel for 2013, and readers of Global Traveler magazine have voted United's MileagePlus program the Best Frequent-Flyer program for 10 consecutive years. Air Transport World named United the Eco-Aviation Airline of the Year Gold Winner in 2013. United is a founding member of Star Alliance, which provides service to 195 countries via 28 member airlines. More than 85,000 United employees reside in every U.S. state and in countries around the world. For more information, visit united.com or follow United on Twitter and Facebook. The common stock of United's parent, United Continental Holdings, Inc., is traded on the NYSE under the symbol UAL.

Efficiency record for the airlines in the Lufthansa Group