Today, London Gatwick has announced it is significantly expanding its noise insulation scheme, making it the most innovative of any airport in Europe. The new scheme will cover over one thousand more homes across Surrey, Sussex and Kent. They will be able to apply for up to £3,000 towards double glazing for their windows and doors as well as loft insulation. This will mean that over 40% more homes will be protected from noise than are covered with the old scheme.

The major changes to the scheme are two-fold. First the noise boundary for the scheme has increased by using a lower level of noise from 66 Leq to 60 Leq as a baseline with the boundary line drawn flexibly to ensure entire roads and communities are included. Secondly, the noise contour boundary has been drawn along the flight paths by 15km to both the east and west of the airport. We are not aware of any other airport in the world offering a scheme of this magnitude. 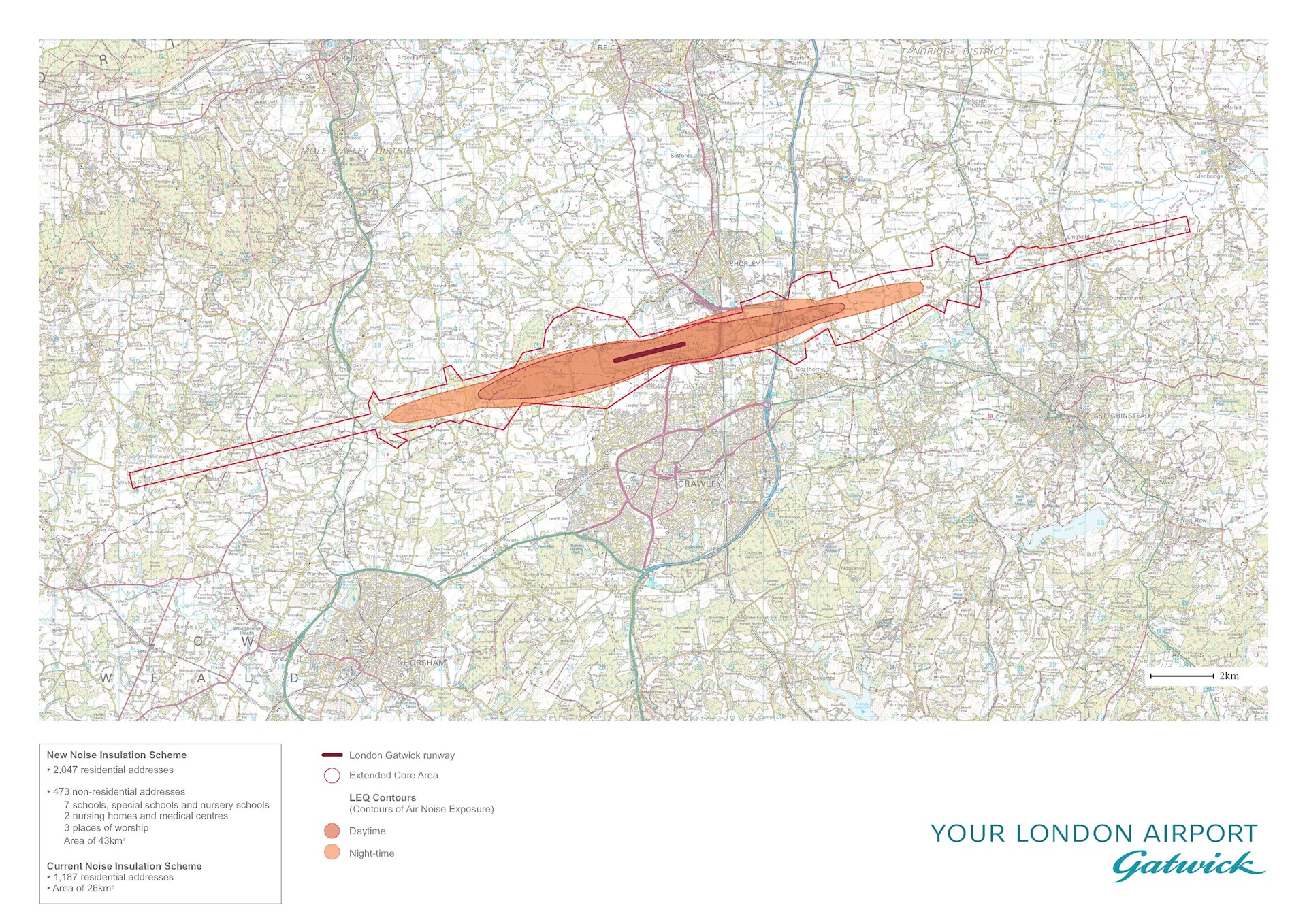 Crucially, the scheme takes into account both the increased sensitivity people have towards noise levels as well as the frequency of how many times they might be overflown. If the new scheme is taken up by all eligible households in the Gatwick area it would cover around 2,000 homes. As a comparison, if the same scheme was applied to Heathrow it would have to cover around 70,000 homes due to the fact aircraft have to overfly densely populated areas of London. A similar scheme at Heathrow would extend to Windsor in the west and Putney in the east, covering landmarks such as Windsor Castle and Kew Gardens.

The impact of both the level and frequency of aircraft noise on local communities needs to be a critical issue for the Airports Commission’s assessment of the Heathrow and Gatwick runway proposals. Gatwick’s noise impacts are already significantly lower than at Heathrow. With a second runway, the number of people impacted by noise at Gatwick would be up to 11,800. This is equivalent to less than 5% of the people Heathrow impacts today¹. Heathrow currently impacts more people than all of the other major European airports combined² and under their current expansion plans over 700 additional flights could use the airport each day. 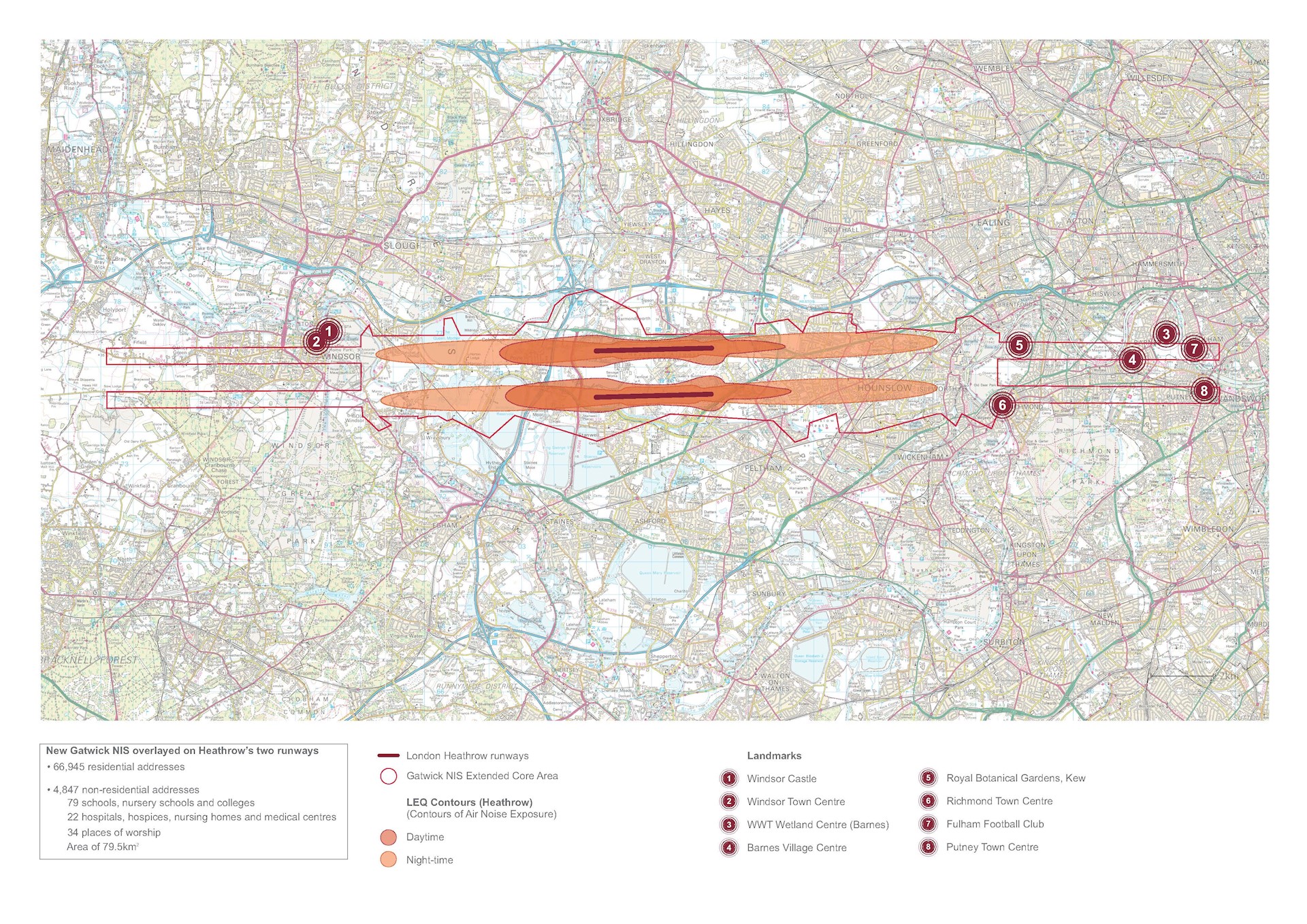 Above: How Heathrow's noise boundary would look if Gatwick's new scheme was applied to it

Commenting on the proposals Stewart Wingate, London Gatwick CEO, said: “The leadership position we have taken on aircraft noise today shows the importance we attach to our local community as we continue to compete and grow from a single runway, but also as we plan to build a second. We understand that the public’s tolerance to noise is much lower than it was which is why we are now extending our noise insulation scheme to cover the 30km flight path east and west of the airport.

“It is crucial that the UK has a deliverable, quick and affordable solution to where the next runway will be. Gatwick can give the UK the economic benefits it needs at an environmental cost it can afford. The role of local communities is critical and must not be over looked. As Heathrow starts to consult its local communities about a third runway they should break their silence about noise and think seriously about following our lead.”

Independent noise expert Dr Ian Flindell said: “Extending the boundaries of Gatwick’s new noise insulation scheme to include more people at lower sound levels is a very innovative departure from existing practice, and demonstrates a huge commitment to the surrounding community. It appears to be among the most generous of similar schemes I have seen across other European airports and possibly worldwide. Aircraft noise can be a very serious issue for many people living near airports, and anything that the airport can do to mitigate this problem is entirely worthwhile.”

The extended noise insulation programme will roll out from 1 April 2014.

Dr Ian Flindell is widely known across Europe as an independent acoustics consultant and as a teacher and researcher at the Institute of Sound and Vibration Research (ISVR).

He is a recognised expert in subjective acoustics, specialising in the assessment and management of environmental noise, particularly around airports, and has contributed to the development of standards, regulations and methods of assessment.

Dr Flindell has been an expert witness at major airport development public inquiries (for British Airports Authority plc) and co-authored the UK government report (for Dept. of Transport) ‘Attitudes to Noise from Aviation Sources (2007). He has also managed ISVR’s contribution to various EU projects including ‘Sound Engineering for Aircraft (SEFA)’ and ‘Community Oriented Solutions to Minimise Aircraft Noise Annoyance (COSMA)’.

Gatwick Airport is the UK’s second largest airport and the busiest single-runway airport in the world. It serves more than 200 destinations in 90 countries for around 35 million passengers a year on short- and long-haul point-to-point services. It is also a major economic driver for the South-East region, generating around 23,000 on-airport jobs and a further 13,000 jobs through related activities. The airport is 28 miles south of London with excellent public transport links, including the Gatwick Express. Gatwick Airport is owned by a group of international investment funds, of which Global Infrastructure Partners is the largest shareholder.

Airports save over 170,000 tonnes of CO2 emissions