The effect of the 2020 Covid-19 pandemic on the global air transport sector has been stark. At the peak of the shutdown, traffic was down 94% compared with the same period in 2019. Around two thirds of the world’s commercial aircraft were parked or in storage and passengers – business travellers, friends and family and tourists supporting many global economies – were left stranded as governments placed rapid travel restrictions in every part of the globe.

Like many of the world’s citizens, we are looking at the opportunity that the re-start of the economy could provide. How can we continue to connect the peoples and economies of the world, long into the future, but with a much lower footprint? What can we do better?

Aviation has had a long-term climate change plan in place for the last decade and with the publication of the Waypoint 2050 report this year, the sector has identified several pathways it could take to meet the sector-wide plan to reduce net CO2 emissions by 50% in 2050. With the support of governments and the research community, aviation at a global level would be in a position to reach net zero CO2 emissions around a decade later. Some regions and individual companies should be able to get to net-zero earlier than this.

The re-start of aviation is an opportunity to build back the global connectivity and economic benefits air transport provides in a way that sets the industry on a course for decarbonisation. The next decade will be crucial:

Despite the immense challenges of 2020 and the year or two ahead, the industry is united in ambition and innovation for a green recovery.

In aviation, waypoints are significant points on a flightpath that pilots use in navigating their direction of travel. They are neither the start nor the end of a journey, but a guide to where the flight needs to go. In developing a long-term goal, the industry has taken this philosophy to acknowledge that 2050 is not a destination, but a marker on a path towards zero carbon emissions from air transport.

In order to reduce the complexity of forecasting across a wide range of variables, Waypoint 2050 has identified consolidated scenarios. These are built on a range of sub-scenarios covering traffic growth forecasts, technology developments, operations and infrastructure improvements, sustainable aviation fuel, and the role of offsets to fill any remaining gaps.

The central traffic growth projection used shows that, by 2050, around 10 billion passengers will fly each year a distance of 20 trillion revenue passenger kilometres. Without any intervention (keeping the current fleet and current level of operational efficiency), this activity would generate some 1,800 million tonnes of CO2 and require over 570 Mt of fuel.

The scenarios below outline how the industry would use technology, operations, infrastructure and sustainable aviation fuels to bring this down, meeting the industry goal by 2050 and going beyond it in the years following.

Under this scenario, technology improvements are prioritised and ambitious with the expectation of the emergence of unconventional airframes and a transition of the fleet towards hybrid/electric aircraft in the short-range and <100 seat category with entry into service from 2035/2040.

The gap between CO2 emissions after technology and operations and infrastructure improvements and the 2050 carbon goal is fulfilled mainly with the use of sustainable aviation fuels: between 290 – 390 Mt of SAF with a 74-100% emissions reduction factor by 2050.

Under this scenario, offsets are not expected to play a central role in 2050 but may be required during 2035-2050 as a transition mechanism and will need to be used to make up any remaining shortfall in emissions above the goal. 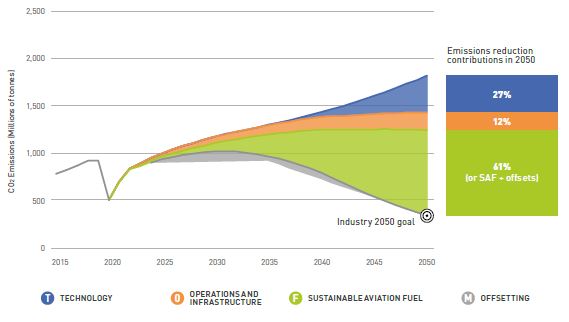 Under this scenario, technology improvements are ambitious with new aircraft configurations such as blended wing body options, although those are based on current powerplant and technologies (not a significant shift to electric or hybrid, with the industry prioritising investment in sustainable fuels).

Despite mid traffic growth, investments in operations and infrastructure result in some net improvements and CO2 reductions.

The gap between CO2 emissions after technology and operations and infrastructure improvements and the 2050 carbon goal is fulfilled with sustainable aviation fuels (requiring between 350 – 450 Mt of SAF with a 77-100% emissions reduction factor by 2050).

Offsets are not expected to play a central role in meeting the 2050 goal but may be relied on during 2035-2050 as a transition mechanism. 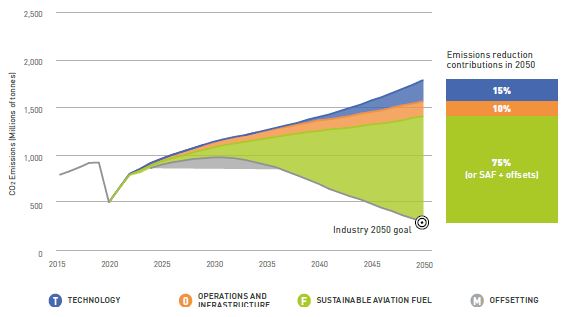 Under this scenario, technology improvements are very ambitious with electric aircraft up to 100-seat, zero-emissions aircraft (powered by green hydrogen) for the 100-200 seat segment and hybrid-electric powered unconventional aircraft configuration for larger aircraft in the 2035-2040 timeframe.

Despite a mid-level of traffic growth, investments in operations and infrastructure result in some net improvements and CO2 reductions.

The gap between CO2 emissions after technology and operations and infrastructure improvements and the 2050 carbon goal is fulfilled with sustainable aviation fuels of between 235 – 340 Mt of SAF with an 70-100% emissions reduction factor by 2050.

Offsets are not expected to play a central role in 2050 but may be required during 2035-2050 as a transition mechanism. 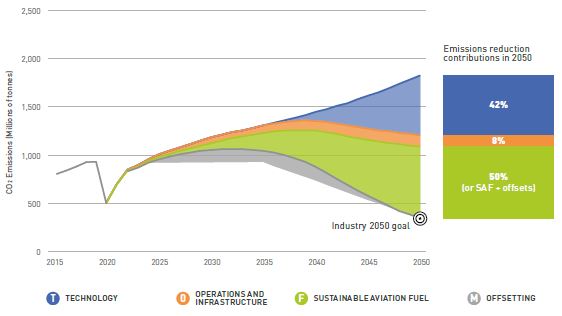 With increasing ambition from nearly 50 countries towards net-zero emissions goals, the questions of how and when net-zero could possibly be achieved at a global level across the aviation system was also considered in the analysis. With the right support from governments and researchers, it is likely aviation at a global level could reach net zero CO2 emissions (without principally relying on market-based measures or offsets) by 2060, or shortly afterwards.

Some parts of the world may be in a position to move towards net-zero emissions from air transport faster than others and several parts of the industry have already identified that net-zero emissions could be achieved in their region by 2050. Around 20 individual airlines worldwide have set themselves net zero by 2050 goals, along with 200 airports in Europe which will have net zero emissions in their own operations. However, this study suggests that the prospects for such an achievement at a global level are more likely in the 2060-65 timeframe, likely with the use of offsets to close the gap following all other mitigation options being deployed. 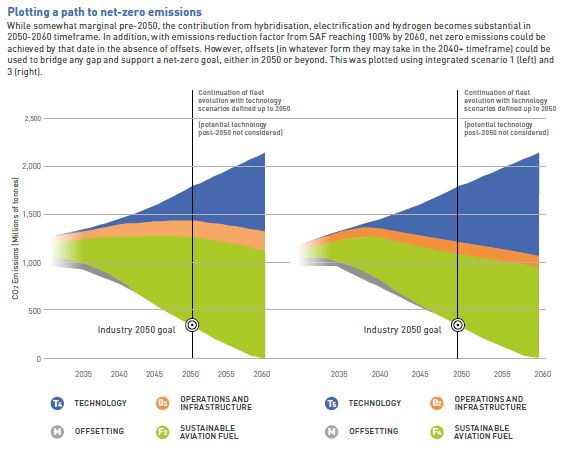 Extra! Extra! Read all about it!