These measures may include tax credits and direct funding to drive new technology programmes and encourage companies to invest in new, more efficient equipment.

While emissions from domestic aviation (and airport facilities) are covered under the Paris Agreement (and earlier the Kyoto Protocol), those from international aviation are not. The decision to exclude international aviation relates to the difficulty in allocating these emissions to specific countries, and also the recognition that a sector-specific measure would be more effective. Therefore, governments agreed to pursue the limitation or reduction of such emissions through the UN's specialist aviation body, the International Civil Aviation Organization (ICAO).

Since 2008, the aviation industry had been asking governments to develop a global market-based measure for international aviation, as part of its strategy to reach the industry climate goals.

With the full support of the industry, these efforts were rewarded at the 2016 ICAO Assembly, where governments formally agreed to adopt the Carbon Offsetting and Reduction Scheme for International Aviation – more commonly known as CORSIA.

With the agreement of CORSIA, aviation will be able to achieve its goal of carbon-neutral growth from 2020. However, it is important to maintain a strong focus on in-sector and longer-term emissions reduction measures falling under the other pillars of aviation’s climate strategy. 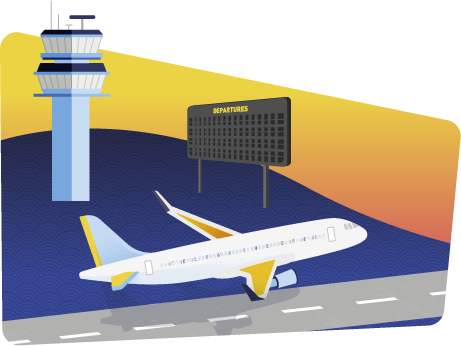 ICAO member states identified that offsetting would be the most appropriate and cost-effective option for international aviation. Offsetting is the process of compensating for one’s emissions by purchasing certified carbon credits (these may include credits issued under the UNFCCC’s Clean Development Mechanism or gold standard credits). In other words, if an activity generates one tonne of CO2, a credit equivalent to a mitigation of one tonne of CO2 can be purchased. The money from the transaction would fund a mitigation project, for example a greener electricity production scheme, often in a developing country.

A global offsetting scheme was the industry’s preferred option because it would generate traceable and transparent funding for climate projects, often with benefits for local communities, without constraining growth in developing markets.

Below are some other carbon pricing instruments that were considered by ICAO but not adopted. These measures are sometimes applied on a smaller scale – at regional, national or subnational level - throughout the world.

An emissions trading scheme (ETS), also known as cap-and-trade, involves setting an overall limit on emissions and then allowing companies to buy and sell emission allowances to meet their own targets. A global ETS was one possible option for ICAO to reduce emissions.

An ETS gives companies a financial incentive to combat global warming, as emissions allowances are given a cash value, so companies that have reduced their own emissions can sell unused credits to companies that exceed theirs. In order for ICAO to develop a full ETS, a complicated underlying system would be required to issue allowances and ensure transactions were secure. This would not be possible by 2021 due to the complexities of a global marketplace. Furthermore, a cap-and-trade scheme would only work if it covered other sectors to enable aviation to trade allowances. In contrast, CORSIA can build on existing registries to trade carbon credits.

The European Union included all international flights departing or arriving at European airports under their internal ETS (EU ETS). This led to a fairly tense stand-off between the EU and other parts of the world, as they objected to the EU regulating their airlines even as they were flying over their own airspace. Prior to the 2013 ICAO Assembly, the EU agreed to pause the scheme to allow negotiations on developing a global scheme to take place at ICAO. Now CORSIA has been agreed and the terms are known, the European Union will need to decide how CORSIA and the EU ETS will cooperate.

Aviation is currently covered by several ETS agreements at a domestic or regional level. The European ETS covers all flights between airports in the EU, Iceland and Norway (the European Economic Area), China has implemented a trial ETS at several Chinese cities, including one in Shanghai that covers domestic airlines, and New Zealand’s ETS covers domestic aviation.

Green taxes add a cost to each flight, by adding a charge for each passenger carried, for each take-off or landing, or for each leg of a flight. Green taxes aim to reduce demand for air travel, which simply means pricing some passengers out of the market. But in many instances, travellers have no reasonable alternative to air transport. There is also little transparency over governments’ use of the revenues collected, and no quantifiable environmental benefits.

The aviation industry believes that green taxes are not a viable solution to climate change because they drain the aviation sector of financial resources and delay investments into fleet renewal or research and development. In nearly all cases, the money raised by governments from such taxes has not been reinvested in environmental improvement measures – the UK’s Air Passenger Duty is a case in point.

It is also worth noting that aviation is already subject to some $7 billion worth of fuel and emissions-related taxes and charges around the world.