We are not just focusing on aircraft emissions. Most environmental concerns around air travel focus on the role of aircraft, but associated infrastructure, including airports and flight paths, also have an impact on the environment, and improvements are being made.

Ground facilities and airports are also taking responsibility to become more energy efficient in a number of ways.

There is a significant impact on emissions from congestion at airports. When flights have to hold and circle before they land, or queue on taxiways before taking off, it is inconvenient to passengers and also adds to fuel use. These inefficiencies are continually assessed to determine whether operating restrictions on flights or new facilities like runways are needed.

One way that the industry is working to reduce congestion and delay (and therefore fuel use) is collaborative decision making (A-CDM), with all parties working together to make sure that flights don’t start their engines until there is a confirmed take-off time and a slot at the destination airport.

The infrastructure area that makes the biggest impact on aircraft fuel efficiency is the air traffic management system. The route a plane takes, the height it flies, and the weather it flies through, all affect the amount of fuel it burns, and therefore the CO2 it emits. These factors are managed by air navigation service providers (ANSPs) who provide air traffic control services.

In many regions of the world, mid-20th-century technology is still being used to direct air traffic. This requires aircraft to zigzag between ground-based radar posts throughout their journey, however, this is undergoing rapid change. By using new satellite-based navigational technologies and procedures known as ‘performance-based navigation’, aircraft can follow optimised, more direct routes with greater accuracy and efficiency. Cutting out unnecessary travel time saves fuel, reduces CO2 emissions and enables aircraft to use the extra airspace to accommodate increasing air traffic, reducing congestion and delays 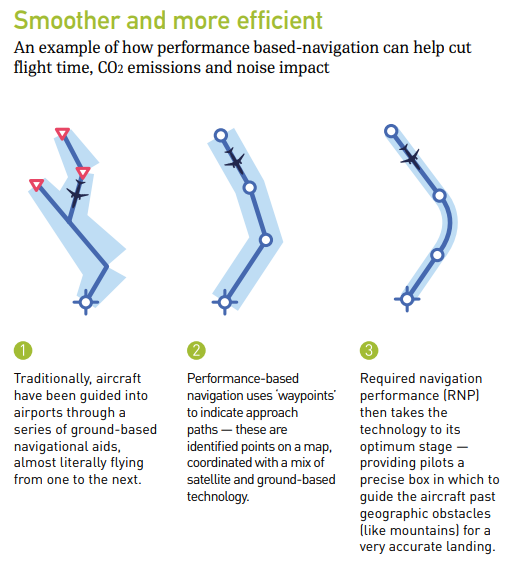 Another procedure that is enabling aircraft to improve efficiency and reduce emissions is called ‘free route airspace’. Traditionally, aircraft have flown along fixed routes, like motorways in the sky. Free route airspace allows aircraft to plan more efficient, direct routes with stable trajectories, saving time and fuel and therefore reducing emissions. This procedure requires cooperation among the countries which an aircraft flies over, and is being applied successfully in Europe.

The engagement and cooperation of governments and international institutions is critical if the potential of new navigational technology is to be realised. Airspace is governed by sovereign states, meaning that any reform needs governmental buy-in. But aviation transcends national boundaries, therefore, airspace should be organised and air navigation services delivered in line with operational requirements, rather than national borders. This would mean that airspace would be controlled across multiple countries.

The greater harmonisation of airspace allows aircraft to navigate seamlessly across national borders on the most efficient routes. In some regions, such as the Middle East, large areas of airspace are reserved for the military, meaning civil aircraft must fly around these areas, adding time, fuel burn and emissions.

The Civil Air Navigation Services Organisation (CANSO) is working with governments in those regions to free up this airspace when not required for military purposes to allow for more direct commercial routes.

In Europe, the unification and simplification of national air traffic management into a Single European Sky would reduce circuitous flight paths. Currently, the European airspace is split up along national boundaries with 45 different ANSPs controlling the airspace. While the operations are very safe, this can lead to duplication of effort and inefficiencies, with airspace users sometimes flying further than they need to. The Single European Sky is meant to be a step-by-step process towards a less fragmented airspace and, according to the European Commission, this better use of airspace will save up to 16 million tonnes of carbon emissions annually. However, progress towards this has been slow, due to lack of political commitment, and the industry is concerned that if governments don’t make the Single European Sky a priority, air traffic congestion and the impact on the environment will increase. There is an urgent need for governmental support to get the project moving.

Similarly, in the United States the air traffic management modernisation programme known as NextGen is not making adequate progress. Although the United States is one single air traffic zone, the system is in need of a more modern approach to handling aircraft traffic, leaving behind the processes that have been in place for decades, and taking a more advanced, dynamic approach to traffic management.

Why a llama was star of an airport conference in Chicago

Air traffic management and efficiency: A chat with NATS