Aviation's impact on the environment

Aviation's impact on the environment

Air transport generated 895 million tonnes of carbon dioxide (CO2) in 2018. This may sound like a lot, but it is only around 2% of the 42 billion tonnes of CO2 generated by human activities every year. Despite passenger numbers increasing at an average of 5% each year, aviation has managed to limit its emissions growth to around half of that. This is through massive investment in new technology and coordinated action to implement new operating procedures and infrastructural measures.

As aviation grows to meet increasing demand - particularly in fast-growing emerging markets - and as other sectors of the economy reduce emissions, aviation’s share of overall emissions is likely to increase.

A growing carbon footprint is unacceptable for any industry, which is why aviation, from manufacturers to airports to airlines to air traffic management, is working hard to limit greenhouse gas emissions.

If we consider energy-related CO2 emissions – without emissions from agriculture or forestry which account for around a quarter of global greenhouse gases – the largest contributor to CO2 emissions is electricity (44%). Second is road transport at 17%, followed by buildings at 10%.

Aviation, producing 2% of all human-induced CO2, emits less than the iron and steel industry (5%), cement production (4%) and the shipping sector (3%) and around the same as the servers and transmission cables of the internet. 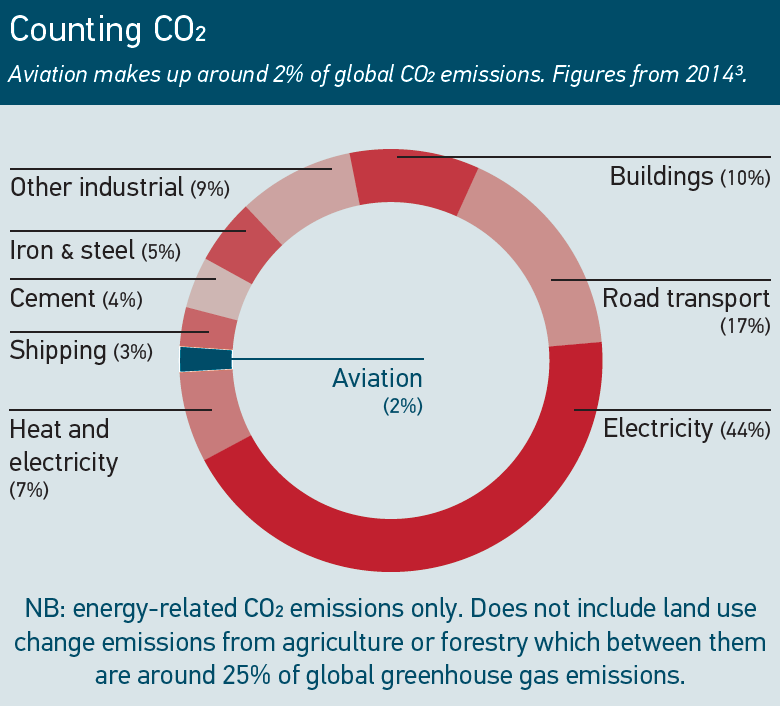 CO2 is not the only greenhouse gas emitted by aircraft. Exhaust fumes from aircraft engines is made up of; 7% to 8% CO2 and water vapour, around 0.03% nitrogen oxides, unburned hydrocarbons, carbon monoxide and sulphur oxides, traces of hydroxyl family and nitrogen compounds and small amounts of soot particles (although the industry has almost eliminated soot emissions over the past few decades). Between 91.5% and 92.5% of aircraft engine exhaust is normal atmospheric oxygen and nitrogen.

The water vapour trails (contrails) created by aircraft also have an impact, but research is inconclusive about whether these have a net warming or cooling effect on the earth. Under some meteorological conditions they can remain in the atmosphere and form ‘cirrus’ clouds, which may have an effect on climate change. For example, some research suggests these clouds may have different cooling and warming effects, depending on whether flights are during the day or night. This type of research can identify whether there are any potential benefits in altering operational behaviour. More work is being done in this area, and the aviation industry is assisting with research into the effects of contrails on climate change, including putting high-altitude atmospheric testing equipment on some passenger aircraft.

There are many references to aviation having a greater effect than other industries because of the height at which the emissions are released. The most significant greenhouse gas, CO2, does not have any additional impact due to difference in altitude, the impact is the same. However, other emissions such as nitrogen oxide and water vapour can have greater effect at higher altitudes. Scientists refer to this as a ‘multiplier’.

Recent research suggests that aviation CO2 emissions should be multiplied by 1.9 times to take account of the added impact of these other gasses at altitude. However, it is important to realise that most other emitters also release non-CO2 gasses and require a multiplier to determine their overall climate change impact (also known as radiative forcing). The rate for road transport, for example, is 1.5 times its CO2 emissions.

When these non-CO2 emissions and the multiplier are taken into account, the Intergovernmental Panel on Climate Change (IPCC) estimates aviation accounts for about 3% of total man-made climate impact. However, some experts say using a multiplier when calculating the emissions of individual flights is inappropriate, as it is a tool to describe longer-term impacts. Other sectors do not tend to have non-CO2 impacts added when calculating their carbon emissions.