Wingtip devices – the angled extension to the end of some aircraft wings – help with fuel efficiency by reducing the drag caused by airflow patterns over the wingtip.

They have been used in a number of different designs, from the ‘wingtip fence’ to the ‘blended winglet’ that is being retro-fitted on some existing aircraft.

A newer development in commercial aviation is the ‘raked’ wingtip which is a more subtle upward sweep of the wing, but produces a similar result as winglets.

Airbus has introduced its ‘sharklets’ device on A320 series aircraft.

And in 2013, Boeing introduced a new generation of winglets called split scimitar winglets which have an even more impressive efficiency increase.

How do they work?

Adding winglets tilted upward at the tips, either to new aircraft or as retrofits to existing models, has delivered 3-5% reductions in fuel burn, depending on the length of the flight and type of aircraft. Winglets reduce induced drag without needing a significant increase in horizontal span. This would be an issue for parking at some airport gates, where no additional room is available for increases in wingspan.

When fast moving air along the top of the wing meets the slow air moving underneath at the wing’s tip, it creates a swirling vortex of air – known as a ‘wake’.

This illustration shows how this wake vortex can be significantly reduced by the use of wingtip devices. Reducing the disturbance caused by the vortex makes the passage of the aircraft smoother and therefore more efficient. 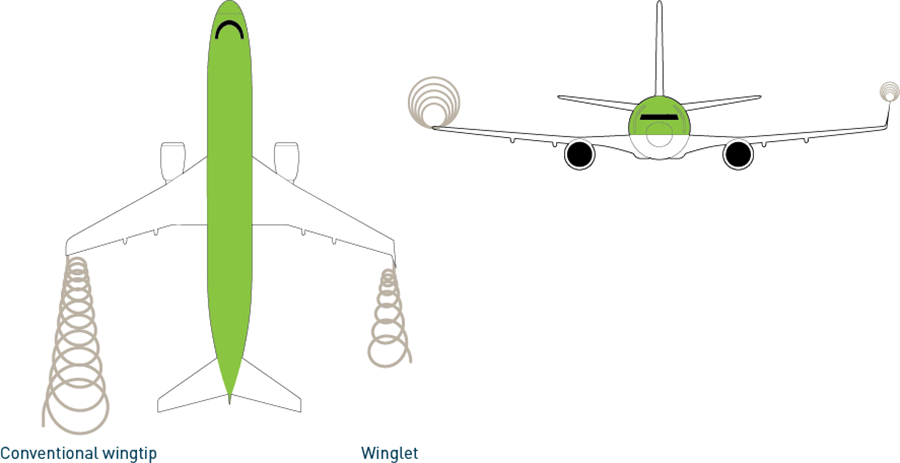