The environmental impact of the aviation sector is best addressed through reducing the amount of jet fuel consumed during each aircraft journey. While it is, of course, currently necessary to power an aircraft with jet fuel when it is in the air, there are significant savings to be made in the ground-based section of an aircraft’s journey, when the plane is being taxied from the terminal to the runway.

In some larger airports, this can be a significant distance, and some estimates suggest that the global short haul fleet burns as much as five million tonnes of fuel per year though taxiing. It is clear that any alternative means of powering this section of the journey can go a long way to reducing aviation’s carbon footprint and there are some innovative taxiing projects already underway to take advantage of this potential.

The EGTS Electric Taxiing System is a joint venture by two of the world’s largest aerospace technology companies, Safran and Honeywell, which is forecast to significantly improve the operational efficiency of airlines by attaching an Auxiliary Power Unit generator, which powers electric motors on the main wheels. It is thought that EGTS will save airlines up 4% of their total fuel consumption and will cut taxiing CO2 emissions by 75%. 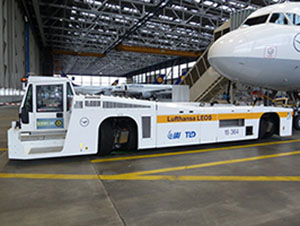 However, EGTS is not the only sustainable taxiing system being proposed. TaxiBot, which has recently been showcased using a Lufthansa plane at Frankfurt Airport, is a similar concept to EGTS, but is an external hybrid-electric tractor that can be attached to the front of an aircraft and is controlled by the pilot. TaxiBot is the first of this type of technology to be fully operational and it is thought that its use at Frankfurt Airport alone can save up to 2,700 tonnes of fuel on long-haul flights per year.

It is hoped that these innovative sustainable taxiing systems will become commonplace at airports world-wide in the coming years and play a crucial role in the reduction of the carbon emissions associated with aviation and help the industry achieve its climate goals.