Remote areas of land (such as vast swathes of Canada, Africa, Russia and Australia) have not been covered by radar and neither have the oceans. In these areas, commercial flights have always followed very strict ‘highways’ and had to stick to rigid timing, flight level and speed to ensure that safe separation is maintained. Aircraft are kept well apart, but it is also not particularly efficient, with very wide safety margins.

A new technology, Automatic Dependence Surveillance – Broadcast (ADS-B) allows tracking of aircraft using a network of stations on the ground. Instead of installing a whole radar position, a small cabin and antenna can help keep track of flights, allowing them to fly closer together and take advantage of the best flying conditions. This technology is now installed in many parts of the world, with some significant results. When set up across Canada’s Hudson Bay area, ADS-B allowed Nav Canada to reduce the separation between aircraft from 80 nautical miles to 5 nautical miles. This will help cut an estimated 757,000 tonnes of CO2e by 2020.

However, the oceans have still not been covered. By 2018, a new consortium, Aireon, will use the Iridium NEXT satellite constellation, placing ADS-B receivers on all 66 low earth orbit satellites (plus six spare orbiting satellites and nine ground spares). Each satellite will be cross-linked, creating a dynamic network to ensure continuous availability of coverage in every flight information region on the globe with low latency and update rates suitable for air traffic surveillance. 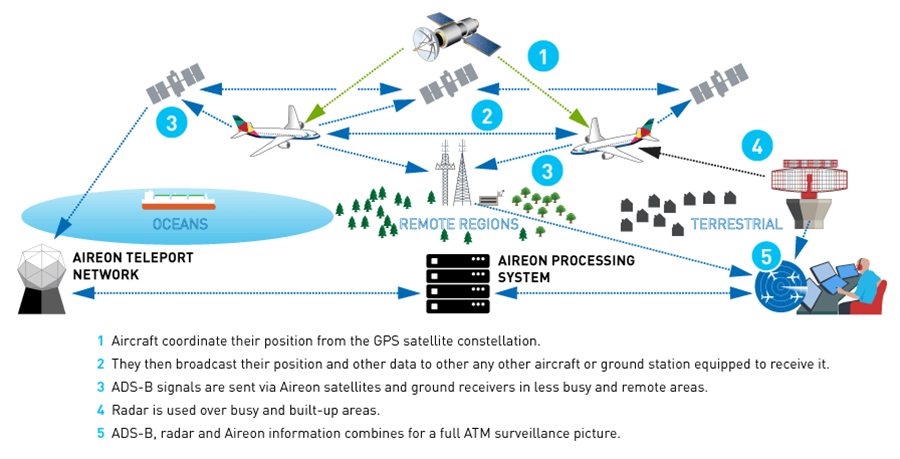 The Aireon project will lead to a cut of an estimated 300,000 tonnes of CO2 per year.

Fuel savings for airlines of at least $100 million annually.