Power from the sun

Airports are the perfect location for solar electricity generating installations. The large, flat surfaces both on the ground and on top of terminal and hangar buildings allow for significant solar installations to be built.

Whilst the design and siting of such solar arrays is not challenge-free – engineers must work with air traffic management and airlines to ensure that reflected sunlight does not blind controllers or pilots – it is possible to install them and benefit from the associated carbon-free energy.

Athens International’s photovoltaic park produces more than 13 thousand MWh of emission-free electricity annually, corresponding to approximately 25% of the airport’s own electricity needs. This results in an average annual CO2 emissions reduction of 11,500 tonnes and, as a landmark project in Greece, helped spark a photovoltaic revolution in the years following. The solar panels face south and are installed on fixed structures, which are built to withstand strong winds and hail and have a very low reflectivity factor (much lower than most objects found at airports, such as parked cars).

Solar panels installed at Brisbane Airport produce an estimated 125 MWh/year of green energy. They directly save 118 tonnes of CO2 per year compared to using grid electricity. Brisbane Airport also purchased Nissan Leaf electric vehicles for staff pool use. The electric charging points for the cars are located at the buildings where the solar panels were installed, to enable them to be directly charged by renewable energy. In the project’s first year the cars have travelled more than 10,000 kilometres. The project encourages behavioural change by promoting car-pooling and a focus on CO2 emissions, while contributing to a reduction in the Brisbane Airport staff commuting footprint. They also save about three tonnes of CO2 per year from the substitution of petrol by solar energy.

Comprising 41,000 solar panels, Indianapolis International’s 12.5 megawatt solar farm covers over 30 hectares of previously unused land and will be used to power the airport’s terminal. It is estimated that the array will reduce the airport’s carbon emissions by 10,000 tonnes per year – the equivalent of taking 2,000 cars off the road. Denver International Airport’s four solar arrays now have the capacity to generate 10 megawatts of electricity, enough to power around 2,595 typical Denver-area homes, or cut CO2 emissions by 11,465 tonnes each year.

The Airports Authority of India plans to generate 50 megawatts from solar plants at 30 airports by the end of 2015. At least eight of India's 130 airports, including those owned by private companies such as the Indira Gandhi International Airport in the capital, New Delhi, already have solar power systems used for aeronautical ground lighting systems installed at the airport's three runways, taxiways and parking stands.

Palau International Airport’s solar installation is the largest to be completed in the island nation. The solar modules are installed on the top of shade structures in the airport car park. Due to the high occurrence of typhoons on the island, the back side of the modules have been reinforced with extra support bars for enhanced wind-pressure resistance. The system is expected to produce an annual power output of 250MWh, off-setting roughly 80 tonnes of CO2 per year. 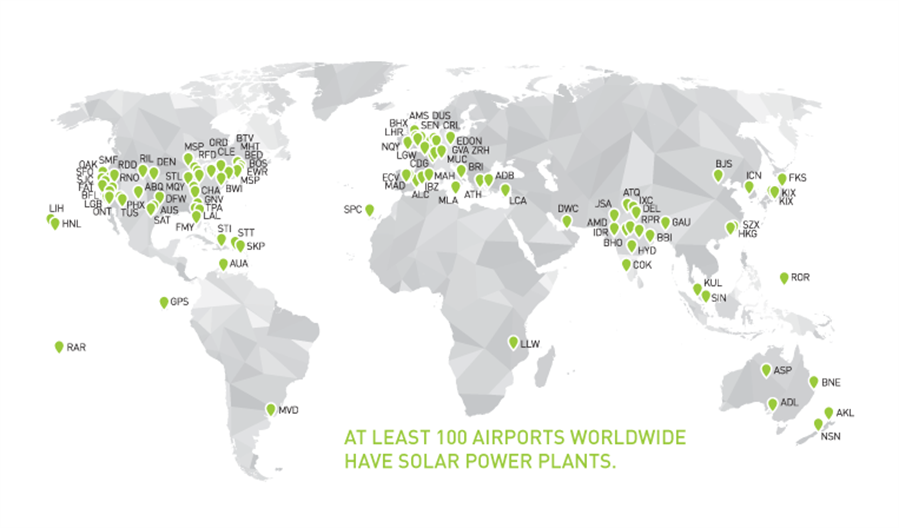 Around 100 airports worldwide have solar installations, generating over 400 megawatts of energy.

Kuala Lumpur Airport in Malaysia has installed the country’s largest solar array. It is estimated the 19 megawatt plant will help save the airport $750,000 in electricity costs and some 18,000 tonnes of CO2 each year.

The Caribbean Island of Aruba’s first solar park is located at the international airport and produces 3.5 megawatts as part of Aruba’s 2020 vision to become 100% independent from fossil fuels.