As sustainable alternative fuels for aviation continue the journey from fringe to mainstream, United Airlines joins forces with partner organisations to convert an idle fuel refinery into a thriving biofuel plant.

Since 2009, United Airlines has been working in collaboration with AltAir Fuels to bring competitively-priced sustainable aviation biofuel to its Los Angeles Airport hub. United Airlines will purchase 57 million litres of lower-carbon, renewable jet fuel over a three-year period, starting in 2015, with an option to buy more. This is the first purchase of alternative jet fuel by a US airline to be used in regularly scheduled operations. Environmental responsibility is further promoted by retrofitting part of an existing, idle, refinery near Los Angeles to become an advanced biofuel refinery, creating 150 new jobs in the area. The plant will use Honeywell UOP technology to convert non-edible natural oils and agricultural wastes into sustainable aviation biofuel.

In addition, United has committed to a $30 million equity investment in US-based alternative fuels developer Fulcrum BioEnergy. The airline will have the opportunity to purchase at least 340 million litres of sustainable aviation biofuel a year for a minimum of ten years at a cost competitive with conventional jet fuel. This alternative jet fuel, produced from household waste, is a ‘drop-in’ fuel that meets all of the airline's technical requirements and specifications. Fulcrum expects its first alternative fuels plant to begin commercial operation in 2017.

In addition to the equity investment, United and Fulcrum have entered into an agreement that contemplates the joint development of up to five projects located near United's hubs and expected to have the potential to produce up to 680 million litres of fuel per year. 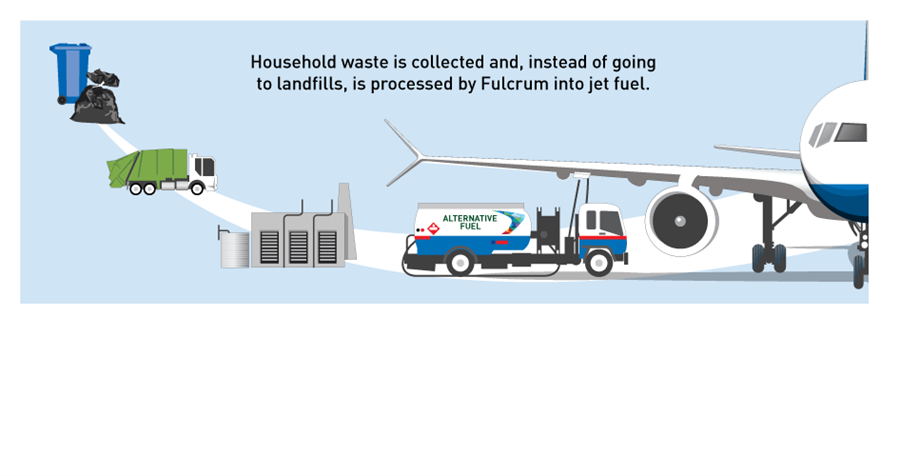 The AltAir jet fuel is expected to provide more than 60% reduction in greenhouse gas emissions on a lifecycle basis, compared to traditional jet fuel.

The projects will decrease United's carbon footprint, divert waste from landfills and create new jobs in communities where refineries are located.