The Chicago Convention – anything but conventional

There are very few regulations which are truly global and those that are we tend to take for granted. The laws of soccer are the same in Samoa as they are in Sudan. Ships have navigation lights and flags in the same places and the radio frequencies which can connect mobile phone users in Russia and Peru have also been universally approved. 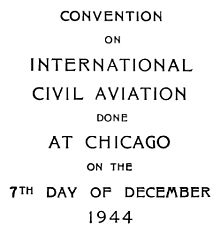 Flying an aircraft from one country into or over another may seem like fairly uncontentious act but there is just one set of international laws of the air and they were agreed on December 7th, 1944.

It took nearly 1,000 people from 54 nations, crammed into the Stevens Hotel in Chicago, 37 days to agree the Convention on International Civil Aviation, or the Chicago Convention as it is now known. It is a remarkable document - a blueprint for the foundation of a civil aviation industry which would unite the world, drawn up at a time of intense global conflict. It needed ratification by 26 States to become law – which came into effect on 4 April 1947, 30 days after the 26th State had ratified the Convention. It now has 191 signatories.

History students looking back at the event now could well be forgiven for asking “why?”. Didn’t world leaders have more pressing items on their agenda at the time? The origins of the document really date back to 1942, when the agendas of allied leaders were even more crammed – but even then they knew that civil air transport would play a huge role in international relations when peace came and the more quickly the world could be united by peaceful aviation links the better it would be for everyone.

Which makes the Chicago Convention a little more than a fairly interesting international treaty – it is a truly historic document which lays out a future of peace and prosperity which was truly visionary. Reflecting on the way it was developed has parallels with international processes at play today (indeed I am currently at the UN Climate Talks in Lima).

The fact that war was continuing to rage may have added a uniting pressure to the discussions, but I think one of the most important differences in negotiations back then was the faith governments had in their negotiators. They were true plenipotentiaries - people entrusted by their governments to make decisions and take actions on their States' behalf. Today, negotiators at conferences such as that taking place here in Lima have constant mobile phone and email contact with their leaders back in the capitals, who seldom have an idea of the pressures of the negotiations, nor of the nuances at play in the room.

The Chicago Convention, battled out over 37 cold Chicago days in late 1944, has really stood the test of time and provided the humankind with a valuable document that helped to grow an industry and change the face of the modern world.

Celebrating 70 years of the Chicago Convention