How far we have come?

As we celebrate a centenary of commercial aviation this year, it is interesting to look back at the way aviation has shaped the way we can travel the world. Last week on Twitter, we saw a map from 1914 which shows travel times from London to destinations throughout the world. 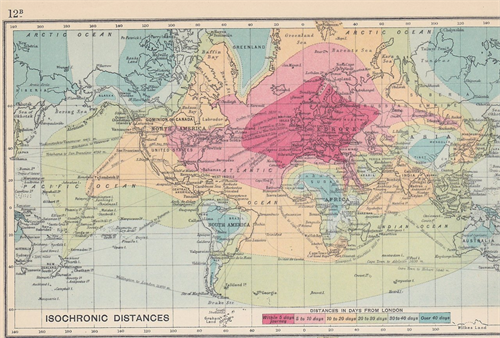 There are some surprises. Alexandria and Moscow could be reached within five days, Cape Town within 20, Western Australia with 30, but Chile was up to 40 days away and Western Sudan and central Australia over 40 days travel from London.  It would be too obvious merely to compare this to today (16.5 hours flying time from Santiago and 26 hours from Alice Springs to London).

Far more interesting would be to compare the carbon footprint of a passenger in 1914 making these journeys by coal-fired steam-ships and steam trains to today’s travel in fuel efficient long-range airliners, especially as some of these long-distance routes can now be flown by twin-engined aircraft – Chile’s LAN took delivery of its first long range twin-engined Boeing 787 in August 2012. In contrast, one of the last really big coal-fired steam-ships in operation today, ferrying passengers and freight across the Great Lakes of north America, until recently was dumping nearly four tonnes of ash a day into the water and other vast quantities of steam and soot into the atmosphere.

Of course, at the same time as the cartographers were drawing this map, the pioneering aviators were starting their airline across Tampa Bay in Florida - you have to wonder if they realised how big an impact it would have on the world!

Potential and Challenges of Indian Aviation

100 years of flight - join the conversation

Getting from A to B: Aviation explained in The New York Times