Economic Value to the economy

As delegates arrive in Doha for the 70th International Air Transport Association Annual Meeting this weekend, many will come face-to-face with the brilliant replica of the aircraft that operated the first commercial airline flight (below). This model of the Benoist Flying Boat has been built by enthusiast Bob Walker and takes pride of place in the entrance of the conference venue. 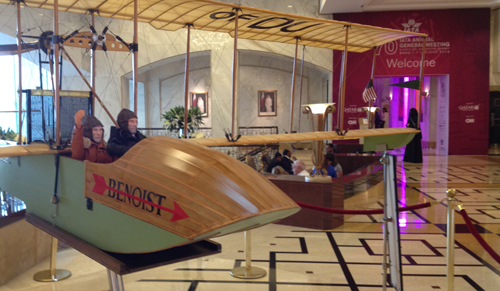 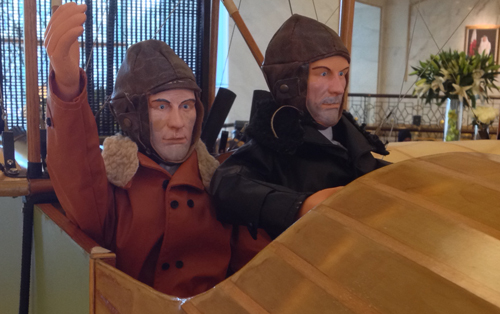 The incredibly serious facial expression of the model pilot Tony Jannus and his model passenger Abram C Phiel are amusing but actually make a good point. Mr Phiel, the world's first airline passenger, had just paid the equivalent of $10,000 for a 23 minute flight with no in-flight entertainment, no food service and importantly, no seat-belts, life jackets or active turbulence dampening system. In fact, that flight's engine stopped halfway through the trip and the pilot had to land to fix the thing in the middle of Tampa Bay. No wonder he was serious!

Flying back then and for the next couple of decades remained a very risky business indeed and, despite the glamorous photos we see of passengers dressed in their finest suits and large hats, in fact taking a trip by plane was not the most comfortable of endeavours. The seats might have been bigger, the champagne and full roast dinners were certainly enjoyed by all passengers, but those that flew were those that could afford to - and the experience was restricted to a very few rich people. A normal New York to San Francisco flight today costs less than 10% of what it cost in the 1930s.

The Daily Telegraph today has a story bemoaning the fact that flying is not glamorous any more. Well, in fact, the price that the travellers of the 1950s paid for their tickets will get you a business or first class seat today and I would argue that the business class experience of today is on par with that experienced by the first jetsetters. The 'ride' is a whole lot better though, as aircraft technology allows a much smoother journey.

In economy things are certainly different. But the democratisation of travel means far more people can fly today that could dream of doing so fifty years ago. It is estimated that in 1965, only 20% of Americans had flown once in their lives. Today, over 80% of Americans have flown at least once. And the rapidly growing middle classes in countries around the world are looking forward to taking advantage of the benefits of affordable travel.

Yes, today's flights might be 'mundane' experiences, but there is a reason for that. We have worked very very hard to make them mundane. Those early travellers would surely have appreciated the unparalleled safety of today's air transport system. An early IATA* Report reveals that in 1920, aircraft operated by airlines at the time spent an average of 47% of the time in the hangar being repaired. Today, we have dispatch reliably of over 99% for modern planes.

While many people are consumed by the 'boredom' of long haul flight and busy themselves watching movies or reading books, sometimes it is nice to just stare out the window and realise that you are taking part in a modern miracle. In the time it takes you to watch a James Bond film you can cross continents and travel further than most people did in their lifetimes 100 years ago.

Flying is still a wonderful thing!

Aviation is a catalyst for Rwanda’s development